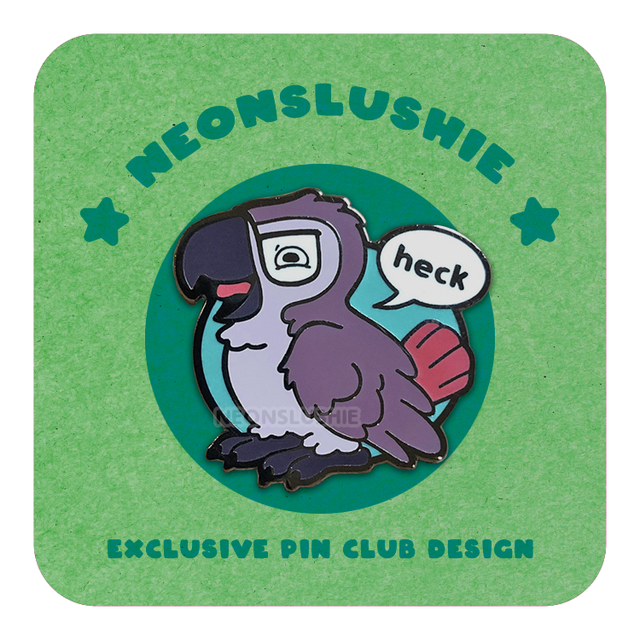 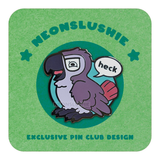 A 1.25" hard enamel pin with a collectable backing card, printed on recycled paper.

They have an amazing vocal ability; they can learn human speech and imitate it near perfectly, as well as learn to communicate actual complex thoughts and ideas! A lot of research has been done on these guys since the 70's, started by an amazing & groundbreaking scientist, Dr. Irene Pepperburg. Through her research, we have learned that AGPs have the cognitive abilities of about a 4 to 6 year old child, that they're able to learn to count and even understand complex ideas such as the concept of "zero/nothing", do simple math, learn colors, ask for objects or treats by name, etc. They've also been shown to have more empathy than other parrots; willingly giving their food to other AGPs to help them out, even if it doesn't benefit them directly.

These parrots are AMAZING, but unfortunately they are listed as an endangered animal. Illegal capture for the pet trade is a large factor why, as well as habitat destruction.

I designed the pin the way I did to reflect the AGPs sassy attitude & enjoyment of being "rude" and silly, with glasses to symbolize their intelligence.

Add to Cart
Commission Queue
Hours:
Monday-Friday 11am-7pm
© 2021 NeonSlushie
All art is © NeonSlushie - Do not copy, trace, recolor, or redistribute.
All characters are © to their owners. Do not copy, redistribute, or make duplicate characters.
PATREON | DEVIANT ART | TWITTER | INSTAGRAM
COMMISSION OPENINGS