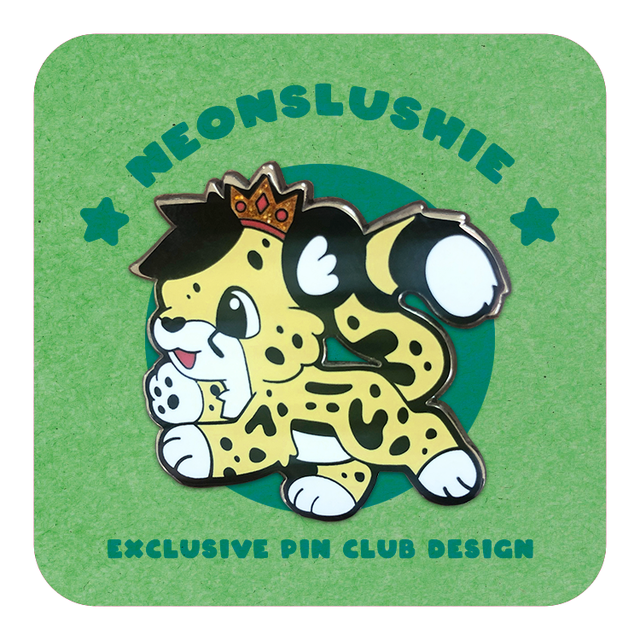 A 1.25" hard enamel pin with a collectable backing card, printed on recycled paper.

Now, for clarity's sake, let me first address the fact that the King Cheetah is really just a regular cheetah, just with bigger spots! So much bigger in fact, that a lot of them become "connected", forming the blotchy patterns you see. Its just a color mutation, just like what you see in domestic cats! (Like a tabby vs a calico of the same breed) - Their exotic, blotchy spots just make them look that much cooler, and they've always been my #1 favorite feline.

I think just about everyone knows that the cheetah is the fastest land animal - but let me remind you that they can reach speeds of over 60 mph (100 kph) in just 2 or 3 strides - that's faster acceleration than most sports cars! To accommodate for this crazy speed-based life, cheetahs have some adaptations that make them look VERY different from other felines:

Their overall body shape is not at all like that of most cats; they're built more like a greyhound! They have tall bodies, with straight backs, loooong, straight legs, and deep chests. Despite being almost as tall as a lion at the shoulder, they're overall much lighter and smaller, weighing less than 1/4th of a lion's weight. They are light, springy, and flexible. Unlike all other cats, their claws do not retract, and instead act like cleats, giving them excellent traction. They have enlarged nasal passages, lungs, and hearts to help keep their blood well oxygenated while running. All in all, a very specialized feline!

Cheetahs, despite their large size, are not actually considered "Big Cats", in the way lions, tigers, leopards, and jaguars are. The reason why? They cannot roar! Cats are essential divided into two groups. Cats that can roar (Big Cats) and cats that can purr (small cats). Cheetahs purr, chirp, and meow! They honestly make the most adorable sounds!

Add to Cart
Commission Queue
Hours:
Monday-Friday 11am-7pm
© 2021 NeonSlushie
All art is © NeonSlushie - Do not copy, trace, recolor, or redistribute.
All characters are © to their owners. Do not copy, redistribute, or make duplicate characters.
PATREON | DEVIANT ART | TWITTER | INSTAGRAM
COMMISSION OPENINGS